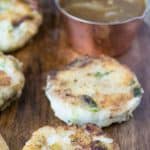 Bubble and Squeak is the funny name given to a dish made of leftovers from a British roast dinner. Leftover mashed potato is mixed with leftover cabbage and cooked in butter.

It is said that this dish originates back to 1770 and originally contained meat, boiled beef actually. It wasn’t until around 1951 that the meat was omitted and only potatoes and vegetables started to be used and that has carried on until now.

A great use of Sunday dinner, Thanksgiving or Christmas leftovers that  included mashed potato.

Depending on what you had for your roast dinner, there’s any combination of ingredients that can be used but there must be potato as the main ingredient. How I was taught to make it by my mother is, after mixing it all gets put in a pan with melted butter and cook until the potato is browned.

Now, this does not make for prettiest of dishes when made this way. For the sake of presentation, I form the mix into patties and shallow fried in a pan. Food should look appetizing after all.

If you don’t have the leftovers to make these potato patties, I have been known to make the potatoes and cabbage just so I can enjoy this dish. There’s no real traditional way to serve bubble and squeak but on this particular occaision I made British bangers and gravy (picture above).

What’s in a name? Bubble and Squeak has 2 meanings. The one I know is that it came from the sounds the ingredients make as they cook, the other (which I’m no so sure about) is the noises your stomach makes after eating it.

If you’ve made this Bubble and Squeak Recipe or any other recipe leave a comment below. I love to hear from my readers!

8 Comments on “Bubble and Squeak Recipe”