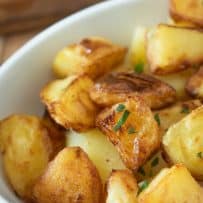 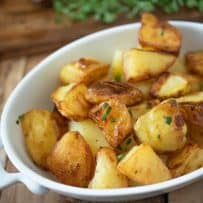 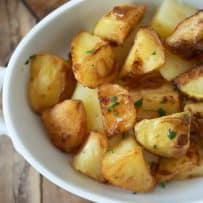 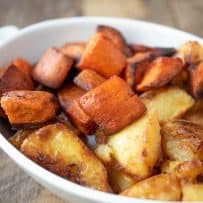 British Roast potatoes is a bespoke, English way of making the crispiest ‘roasties’. A perfectly browned and fabulously crispy outside leads to a soft and fluffy center. Just like mum used to make and probably still does.

If you were raised in the U.K. (and ate a Sunday roast or British Christmas dinner) you most likely were raised on these. Read on and found out why they are so popular.

There’s a British way of roasting potatoes? There sure is, and we take it very seriously, here’s why. Sunday lunch/dinner is the most looked-forward to meal of the week (see my Roast Beef Dinner/Sunday Roast for all the details) and the potatoes are an important component. These and the gravy are typically everyone’s favorite part of the meal.

The two important steps in achieving the best result, is to pre-boil the potatoes. After they are tender, you get rough with them by shaking them about the colander after draining. They are then allowed to dry-out slightly. The rough edges and the dried surface allows the edges crisp up in the oven.

Once they have ‘dried’, they are added to hot oil that has preheated in a pan in the oven. Pretty much like when you make British Yorkshire Pudding.

The potatoes are essentially shallow frying in a layer of oil/fat. There are recipes out there that recommend a fancy animal-based oil or fat like duck or goose fat to be used, but who has easy access to these? I don’t, so that I why I like to use a light, flavorless oil like vegetable, canola, rapeseed. Lard is also an option.

They need to be turned periodically so they crisp on all sides. Once they are browned, they are finished with a light sprinkling of salt. And that is all there is to achieving the crispiest roasted potatoes.

Can you make roast potatoes with sweet potatoes or yams? Yes, they crisp up very well too and they are deliciously sweet. See the picture below.