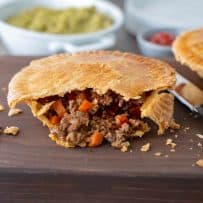 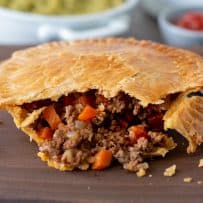 Minced Beef and Onion Pies are a satisfying and comforting meal when served with mushy peas and mashed potato.

If you’re familiar with British cuisine, you’ll know we like our savory meat pies.

These pies are the typical pies that you will find in any high street bakery and are a popular quick, warm lunch on-the-go.

What is a British Mince Pie?

Mince pies in the UK are similar to savory hand pies in the US. They come in individual sizes (these are 5-inch/13 cm rounds) as they are a popular on-the-go lunch that are sold in bakeries, which is how I made them for this recipe.
It can also be made family style in a 9-inch/23 cm pie pan. Just slice and serve.

How to Freeze Minced Beef and Onion Pies

Wrap the unbaked pies well in aluminum foil or plastic wrap and then into ziptop bags. Defrost in the fridge overnight and cook as instructed in the recipe. Serve with a side of mashed potato and mushy peas, it doesn’t get anymore British than this.

The filling is similar to shepherds pie. Starting with ground beef, chopped onions and carrots all cooked with a beef stock and tomato paste with Worcestershire sauce to make a rich beefy filling. Traditionally carrots are not added, but I like to add them for sweetness and it gives the filling some color.

After simmering the meat and vegetables, it’s important to strain any liquid and fat to prevent getting soggy pies. It’s also important to let the mixture cool before adding it to the pastry.

For this recipe I chose to make individual pies in 5-inch/13 cm round pie pans. There is pastry on the bottom as well as the top because in England we don’t serve the pies in the dish, they are removed and served right on the plate.   Don’t forget to serve with a side of mushy peas (see pic below).

This homemade pie dough recipe is so light, so flaky and buttery. So easy to make and turns out perfectly every time. It is my go-to recipe for all my savory and sweet pastries like:

These pies keep so well refrigerated for about 3 days. Keep any leftover pies in the tin, that way you can re-heat at 350°F/177°F for about 20-25 minutes. The pastry will stay flaky and light and will be as if you had just made it.

Another popular side dish to serve with savory pies is British Baked Beans (< click text for recipe). Made from scratch using dried beans and baked in a flavorful tomato sauce.