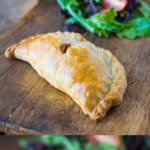 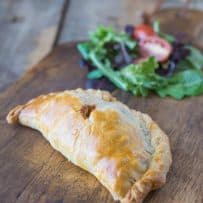 Traditional Cornish Pasty, savory packages of beef and potatoes wrapped in flaky, buttery pastry. This British classic makes a wonderful lunch or dinner on a chilly day. You may (or may not) have heard of the Cornish pasty (sometimes spelled pastie, pronounced pass-tee, not paste-y). Alongside the sausage roll, the pasty is Britain’s favorite on-the-go meal.

Bakeries are all over England and that makes it convenient to go in and pick-up a fresh pasty for lunch, the most popular being the Cornish pasty. Other varieties include cheese and onion and minced beef, but whatever the filling, they’re always savory, never sweet.

The Cornish pasty is a complete meal in itself that is a mix of beef and vegetables that are incased in a flaky pastry that is then baked.

There are many variations to the Cornish pasty, like the shape and filling, but these are not correct. For the pasty to be authentically Cornish there are some rules. After all, it represents the county of Cornwall in the South of England and it has to be right.

The pastry should be shortcrust pastry (like pie crust, unsweetened). Chopped skirt steak, onion, rutabaga (swede if you’re in the UK), potato, salt, pepper and a little butter are the proper filling.

A circle of pastry is rolled out and the filling must be placed in the pastry uncooked, to allow it to cook slowly and develop the flavors.

The way the pastry is sealed also has to be right. The edge has to crimped in a way that looks like a braid, basically rolling the pastry edge on itself to create the characteristic look.

The sealed edge is not to be on the top of the pasty, but on the side. If it doesn’t have this crimp, it’s not Cornish. In addition, if the pasty is not ‘D’ shaped it is also not Cornish.

I like to serve the pasty with a simple side salad. Since the filling contains all the makings of a meal, a heavy side is really not needed, but a nice pint of ale will certainly finish the meal nicely!

If you’ve tried this Traditional Cornish Pasty recipe or any other recipe on the blog then don’t forget to rate the recipe and let me know how it turned out in the comments below. I love to hear from my readers!

This Traditional Cornish pasty recipe first appeared on Food Fanatic where I am a contributor.