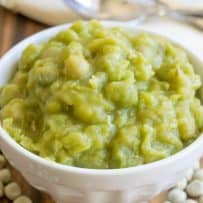 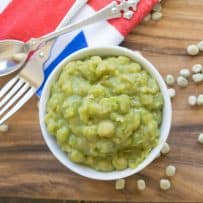 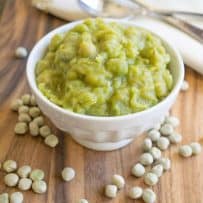 Mushy Peas are a true British side dish made from dried marrowfat peas that are cooked on the stovetop until, well, they get mushy. Typically served with fish and chips or a savory meat pie.

What are marrowfat peas? They’re not very well known in the U.S. They are green, mature peas that have been allowed to try naturally in the field and it’s their starch content that makes for great mushy peas.

Marrowfat peas are also used for wasabi peas, so you may have eaten them and not even known it. You can make this dish with fresh peas but the texture is not the same so if you can find dried green peas they will get the dish tasting and being closer to the real thing.

Normally the words mushy and peas (or any dish) don’t usually go together because who wants to eat mushy peas? Most of us eat peas that are juicy and plump but this is a traditional British dish where you want the peas mushy and they taste so good (ask any Brit they will tell you).

In typical British fashion, different regions of the country have their own take on them. Sometimes served on their own as a snack, with mint sauce.

In Scotland they like them soupy with vinegar served in a bowl. In the North of England (where I am from) they are usually seen accompanying fish and chips or a savory meat pie.

Last week I made minced beef and onion pies (pic above). A classic British savory favorite made with ground beef, onions and lots of delicious flavors nestled in a flaky pastry (my go-to comforting meal).

Another classic that everyone has heard of, fish & chips is another dish that mushy peas are sometimes served with.

Because the peas are dried they have to soaked in boiling water overnight. Not a lot of work involved, just time. The peas soak in a nice hot tub with baking soda (bicarbonate of soda) which helps them soften, while you get your beauty rest and they are ready for cooking.

The next day, they get simmered in salted water for about 20 minutes and you have perfect mushy peas. They’re good for you too. Whoever said British food is not healthy?

If you’ve tried this Mushy Pea or any other recipe, leave me a comment below. I love to hear from my readers.

This mushy peas recipe first appeared  on Food Fanatic where I am a contributor.