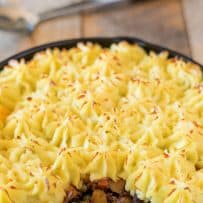 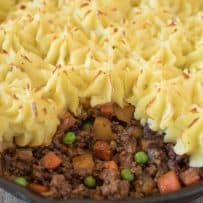 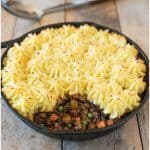 This Traditional Shepherd’s Pie is a British comfort food classic loved by all. This is a classic recipe using ground lamb cooked with vegetables and Guinness for an extra flavor boost, topped with fluffy mashed potato and baked. The same recipe using ground beef is called Cottage Pie.

Probably the most popular and recognized recipe from the U.K.

The perfect make ahead, one pan meal. Just make up to the point of baking, but don’t bake. Allow to the dish to cool, cover and refrigerate for 3 to 4 days.  When ready to serve, preheat oven to 350°F/177°C and bake for 25 minutes until the top is browned.

What is the difference between cottage pie and shepherd’s pie?

Real shepherd’s is made with ground lamb and not beef. The name makes sense if you think about it.  Lamb is a sheep and a shepherd is a person who tends to sheep, hence the name.

Why is it called a shepherd’s pie?

The pie made with beef is traditionally called cottage pie, made by the poorer people who lived in cottages from leftover beef and lamb. Both pies derive from the 18th Century, but as time has gone by, beef has becoming increasingly popular and more widely used than lamb, and so the recipe using beef is now commonly known as shepherd’s pie.

I like to add Guinness to my traditional shepherd’s pie. Over the years of making this, I found that the rich flavor of the beer gives it that extra depth of flavor you just cannot get without it. You can omit if you are cooking for children and substitute with more beef stock.

The topping is made using mashed Yukon gold potatoes as they make for soft and creamy mashed potato. I have been known to add a small rutabaga to the mash which takes it to a new flavor level, if you would like to try.  As an extra bonus, the dish makes a little gravy as it cooks so you can reserve it and use for spooning over the top when serving.

I like to make this recipe in a 10-inch cast iron skillet (or oven-proof sauté pan) that be transferred to the oven. If you don’t have a cast iron or oven-proof skillet, you can start this recipe on the stovetop in whatever pan you have that will work then transfer to a casserole dish of about the same size to finish in the oven.

Yes! You can freeze before baking (just allow to cool) and cover tightly. It will keep frozen for up to 2 months. When you are ready to make, defrost in the fridge overnight then bake as per the recipe instructions. To freeze leftovers, allow to cool and wrap them up well. To reheat, you can bake right from frozen at 350°F/177°C for 1 hour.

If you’ve tried this Traditional Shepherd’s Pie or any other recipe on the blog then don’t forget to rate the recipe and let me know how it turned out in the comments below. I love to hear from my readers!

Taste your stock, if it is salty, you may need to adjust the amount of salt in the dish