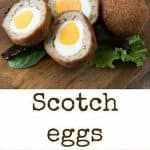 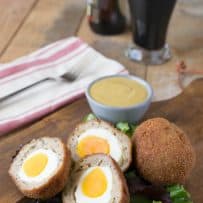 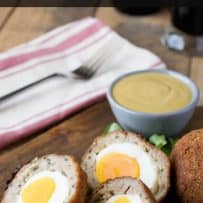 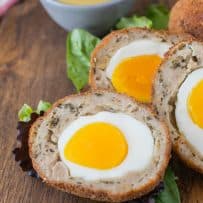 Traditional Scotch Eggs are hard-boiled eggs wrapped in sausage meat, breaded and fried. Served with a delicious mustard dipping sauce, this is quintessential British fare. Who said British food is bland? Make them ahead, then grab-and-go as you need them.

The Scotch Egg is not actually a Scottish recipe at all; it was actually born and bred in England. I have read that they were invented by the upmarket store Fortnum & Mason and a story how they were derived from the Indian dish Nargisi Kofta, but there is really no origin set in stone.

What is a Scotch egg?

A popular British dish that is a hard boiled egg wrapped in sausage meat that is breaded then fried. Served with the yolk firm, or runny.

They’re delicious warm and crispy right out of the fryer, or perfect for a grab and go breakfast, road trip or picnic.

You can boil the eggs so the yolks are runny or set, the choice is yours. See below for both methods.

Scotch eggs are  popular picnic food because they travel well and can be eaten at room temperature or even cold. A lot of Scotch eggs in pubs and restaurants and are served with a runny yolk (what is better than a warm runny yolk?)  This is achieved by soft boiling the eggs so the yolks don’t overcook when they are fried. I like them both ways.

How to make runny scotch eggs

Boil room temperature eggs for 4 minutes. Transfer the eggs to cold water then peel. Wrap the egg in sausage meat, bread and fry.

How to make firm scotch eggs

Boil room temperature eggs for 10 minutes. Transfer the eggs to cold water then peel. Wrap the egg in sausage meat, bread and fry.

This popular British pub dish is usually served warm with a dipping sauce that can range from sweet to savory; today we went savory with a mustard sauce, which is optional, but a nice dipping sauce all the same.

Along with sausage roll and sandwiches, the Scotch egg is also a very popular convenience food sold in most grocery stores and food shops across the UK. For me, homemade is far superior to store bought and if you’ve never bought them, don’t bother, make them yourself instead. I even eat them for breakfast eggs and sausage are breakfast items after all, just add ketchup.

Just like the British dialect can change around the country, some areas of England have adopted their own local Scotch egg recipes. I have yet to try the variations on this classic, but one thing is for sure, these eggstraordinary ovals of goodness are a staple in my household.

If you find that your Scotch eggs split (like the picture above) while frying don’t worry, they’re still edible and delicious.

Why do Scotch eggs split when frying?

This is because there is a gap or crack in the sausage meat and the oil has gotten between the meat and the egg. Make sure they are well sealed before frying.

I like to serve with a simple mustard sauce. It is so easy to make, it’s only 3 ingredients.  It is optional, but it’s nice to have something to dip them in.

If you’ve tried these Scotch Eggs or any other recipe on the blog then don’t forget to rate the recipe and let me know how they turned out  in the comments below. I love to hear from my readers!

If the sausage meat is hard to mold, run through a food processor to soften.

This Scotch eggs recipe was first appeared on Food Fanatic where I am a contributor.