Easy Toad in the Hole with Onion Gravy 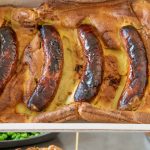 Easy Toad in the Hole with Onion Gravy is a classic British comfort food, one pan dish. Pork sausages are baked with Yorkshire pudding batter that rises around the sausages turning brown and crispy. This is the perfect one pan dish because everything is baked in 1 casserole dish.

The batter is the same as Yorkshire Pudding (similar to popovers) but I added fresh rosemary, which is not very traditional but adds great flavor to the batter.

The best sausage to use are obviously British-style pork sausages but any sausages you like will work also.

What do you serve with toad in the hole?

Gravy is a non-negotiable, the rest are a personal choice. I like peas, carrots and sometimes mashed potato.

Why is it called Toad in the Hole?

There is not one clear story on this, but the most popular one is the look of the sausages poking through the batter looked like frogs or toads peering out from

Toad in the Hole is a northern England dish dating back to the 1700’s. Just like many old recipes, this dish was served in the poorer households using minimal and inexpensive ingredients.

It is also said that other meats instead of sausage were used like steak and lambs kidneys. Personally, I’m not sure the dish would be quite the same using something other than a good British banger.

If you’ve tried this Toad in the Hole with Onion Gravy or any other recipe on the blog, then don’t forget to rate the recipe and let me know it turned out in the comments below. I love to hear from my readers!

Taste your stock, if it is salty, adjust the amount of salt you add

4 Comments on “Easy Toad in the Hole with Onion Gravy”