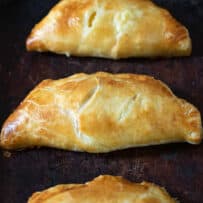 British Cheese and Onion Pasty is simply a flaky pastry filled with cheese and onion mixed with a little mashed potato. This recipe is truly just like mum used to make (at least mine) with really good, authentic English cheddar cheese.

There are many savory varieties of the British pasty (sometimes called bakes). You may be familiar with the Cornish Pasty, which is meat and vegetable filled. In Scotland, they call them ‘bridie’. There are also steak pasties and chicken pasties.

In addition to pasties (or hand pies, the American version of a pasty) individual Meat Pies and the famous Sausage Roll, are some of the most popular British convenience foods.

Pasties make a great meal on-the-go, and one of the largest countrywide chains in the U.K is Gregg’s bakery. This original bakery started in the Northeast of England in 1939, and literally serves millions of pastries every year. But the pasty has been a British favorite since the 13th century.

What pastry is best for cheese pasty?

Homemade pastry or pre-made puff pastry will both work.

A typical cheese and onion pasty is filled with cheese, onion and is mixed with a little mashed potato. Typically made with homemade pie-crust pastry, but I also like to use puff pastry.

Why is there potato is cheese and onion pasty?

It acts as a binder to keep the filling together otherwise, the melted cheese will ooze out.

Can you freeze a homemade pasty?

Yes, they are best frozen before baking. Just defrost and bake according to recipe.

How long with homemade pasties keep?

Pasties will keep refrigerated in a sealed container for up 5 days. To reheat, put on a tray and put into a cold oven. Turn on the oven to 300°F/150°C and heat them for 10-15 minutes. What this does is heat them slowly from the inside out so they are warmed through.