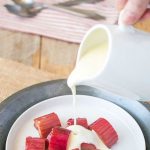 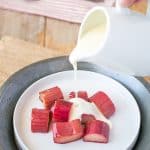 Rhubarb and Custard is a sweet, tart, creamy and comforting dessert. Fresh rhubarb is roasted with sugar to get sweet and release its delicious juice then topped with warm, thick English custard.

Rhubarb took England by storm in the 1800’s. It is somewhat of an acquired taste, but mostly used in sweet applications because of its tart nature, like pies, tarts, jams, jellies and puddings.

The plant had been around a while, but it was the crowning of Queen Victoria that thrust it into the limelight.

If you’re not familiar with rhubarb, it is tempting to try the rhubarb raw (because it looks like celery) this I do not recommend as I know first hand trying it as a child and I’ve never done it since.

Being a member of the buckwheat family, interestingly the leaves are said to be poisonous. Makes you wonder how it ever became a food, but prepared with sugar and spices it is delicious.

Rhubarb is a seasonal plant and it is difficult to obtain in cooler climates but do very well when grown in greenhouses which is how we grew them in England usually in mid- to late spring in the Northern Hemisphere, autumn in the Southern Hemisphere.

Rhubarb and custard is not only classic English dessert, but there was also a classic British cartoon short in the 1970’s named Roobarb and Custard. Funny rivalry between Roobarb the green dog and Custard the pink cat who lived next door, it was one of my favorites.

The English custard part of this dessert is my favorite. It was, and still is the ultimate comfort food that can be served with literally any dessert. Depending on the recipe, I make the custard in 2 consistencies. Runny, like in this rhubarb and custard, or thicker for tarts.

I love to serve runny custard over frozen berries for a lovely summer treat. You can find the recipe here > Hot English Custard Over Frozen Berries.

I’ve used this custard in a few of my desserts like sticky toffee pudding, berry custard tart and it is delicious on it’s own, warm for the cold months or serve cold in the warmer months.

This rhubarb and custard recipe first appeared on Food Fanatic where I am a contributor.

11 Comments on “Rhubarb and Custard”