Don’t miss a recipe! subscribe to our FREE newsletter:

Don’t miss a recipe! subscribe to our FREE newsletter: 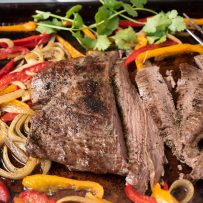 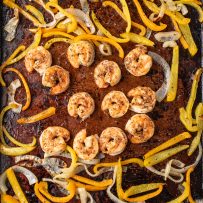 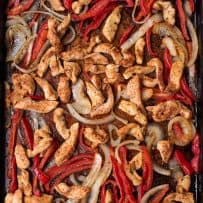 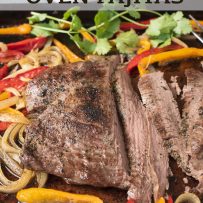 There’s nothing better than a sizzling platter of fajitas with charred peppers and onions. These One Pan Oven Fajitas are roasted on one large baking pan which makes for easier cleanup.

What are your favorite fajitas? Steak, chicken, shrimp? This roasted fajita recipe works with all of these delicious protein options and the recipes are all below.

The marinade, which can be used for any of the proteins mentioned above, is the most important part of these One Pan Oven Fajitas because that is where all the flavor lies.

I like to serve fajitas in warm flour tortillas and I just recently posted a recipe for No Lard Flour Tortillas that are vegetarian/vegan.

How to Cook Chicken Fajitas in the Oven:

How to Cook Shrimp Fajitas in the Oven:

You will need 3-4 shrimp per fajita, per person. The maximum time you can marinade the shrimp is 20 minutes, otherwise, the acidity in the orange juice can ‘cook’ the shrimp, turning them pink. Since the shrimp cooks up quickly, I broil (oven grill) them only for 10-12 minutes for regular sized shrimp, 15 minutes for jumbo shrimp. Picture below.

These One Pan Oven Fajitas can also be made on your indoor or outdoor grill. For the steak, grill on medium-high heat until the internal temperature reads 155°F/68°C using a meat thermometer. Always allow the meat to rest for 10 minutes before slicing.

For grilling the chicken, internal temperature should read 165°F/73°C.

For the ease of grilling the shrimp, I like to thread them onto skewers to make them easier to handle and turn over.

For shrimp, use 24 shrimp
For chicken, use 4 skinless, boneless chicken breasts