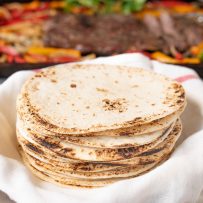 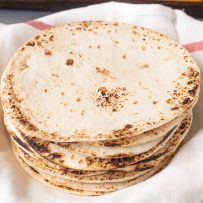 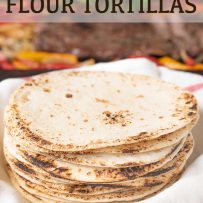 No Lard Flour Tortillas are a vegetarian/vegan alternative to the traditional recipe that uses lard or shortening. Use them for all your favorite dishes like quesadillas, tacos and fajitas. Coconut oil is a great substitution for lard because it has the same consistency to make the tortillas vegetarian and vegan. But they will not taste like coconut.

Unflavored coconut oil, also known as refined, has no coconut aroma or taste.

Where it is certainly easier to use, you don’t need the kind of traditional tortilla press that you see when tortillas are made, just a simple rolling pin can achieve the same result.

These No Lard Flour Tortillas were the perfect vehicle for the One Pan Oven Fajitas I made last week. Also perfect for Sonoran Shredded Beef Tacos and Slow Cooker Barbacoa Tacos.

Before I serve the tortillas, I like to char them which also warms them. This can be done by putting them directly over your gas stove flame one at a time. If you don’t have a gas stove, you can broil them or use a kitchen blow torch. The char adds a lovely smoky flavor to the tortilla.

Flour tortillas are derived from corn tortillas that are popular for tacos, taquitos and enchiladas. Corn tortillas are made in the same way as flour, but only with corn flour and water making them gluten free and healthy.

Can you freeze flour tortillas?

The best way to freeze flour tortillas is to place a piece of parchment/baking paper between them so they don’t stick together. You can also take out as many as you need and keep the rest frozen when you need them. Stack them and wrap in plastic wrap and seal in a large freezer bag. They will keep in the freezer for up to 6 months. Defrost at room temperature or in the fridge.

2 Comments on “No Lard Flour Tortillas”