How to Make Gnocchi 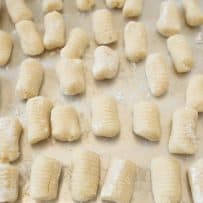 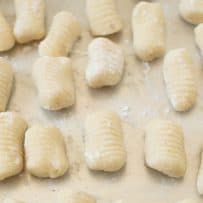 A simple, step-by-step guide of How to Make Gnocchi. Soft potato pillows that are a light and delicious alternative to pasta that can be paired with almost any light sauce. With step-by-step instructions, plus storing and serving suggestions.

Home made gnocchi, not as scary as you might think and when they are right, they are nugget dumplings of goodness that just melt in your mouth.  You can see from the video in this post.

The word ‘gnocchi’, derived from the Italian word ‘nocchio’, means a knot is in wood. But it’s not only a dish served in Italy, gnocchi are served in France where they are known as ‘gnocchis à la parisienne, in Croatia they are called ‘njoki’, and South America, called ‘nhoque’.

I would say that most of us at one time or another have had gnocchi, or at least seen them on a menu in a restaurant. When they are made correctly, they should be light and almost melt in your mouth. I have had some that are heavy, dense and tough and that is just a case of using too much flour and over-kneading the dough.

With only 4 ingredients, potato, flour egg and salt, this makes them easy to prepare and there’s not really anywhere you can make a mistake. You start with mashed potato.

Perfect mashed potato tip – I use a potato ricer. It’s like a giant garlic press for potatoes and makes the smoothest mash.

Just like an Italian grandma making pasta (and the method I use), I like to make my gnocchi on the counter. A well is made in the center of a pile of all purpose flour and the mashed potato added.

How to Make Gnocchi – Step by Step

Boil peeled potatoes in a pan of boiling water.

Drain the cooked potatoes and allow to cool.

Mashed the potatoes or run them through a ricer to make them as smooth as possible.

Flour, egg and salt are added to the mashed potato. Everything is mixed and kneaded together to form the dough.

Using your hands, mix and slowing incorporate the flour and egg mix until the dough is no longer sticky and form a ball.

Gnocchi dough tip: In addition to  super soft potatoes, the other key to soft fluffy dough is to only add enough flour to bring the dough together and not be sticky. Do not over-knead the dough which will develop the gluten in the flour and make them tough.

A portion of the dough is cut and rolled into a 3/4 inch thick log.

The log is cut into 3/4 inch long pieces, you just made gnocchi!

Wonder how you get those ridges? Rolling the gnocchi over a fork or gnocchi board is how to make the ridges. The ridges are an important element to the gnocchi which helps sauce stick to them.

How to store fresh gnocchi:

They are best stored in the freezer. After rolling the dough, place them on a lightly floured board, slightly spaced, not touching. Place this in the freezer for 1 hour until you can handle them. Then you can transfer them to a zippered bag or sealed container. You can cook them right from frozen.

Some serving suggestions for gnocchi:

If you’ve tried this or any other recipe on the blog then don’t forget to rate the recipe and let me know how they turned out the comments below. I love to hear from my readers!

7 Comments on “How to Make Gnocchi”