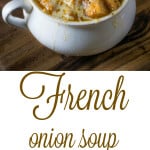 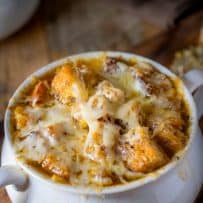 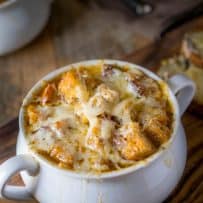 French Onion Soup is always a great idea, but this one comes with something different, a delicious onion broth topped with mini croutons and lots of melted cheese.

There’s no denying, Julia Child is the guru when it comes to French Onion Soup, or any French cooking for that matter. But, there is a flaw in the eating of the soup and it’s called a giant crouton.

This recipe is a classic French Onion Soup made in the traditional way with Cognac and wine. Read on to find out the reason for my mini croutons.

A crouton in every bite

I can’t tell you how many times I’ve eaten this soup and sloshed it out of the bowl trying wrangle the 1 large crouton. So I came up with adding mini croutons. This way you get a bite of soup, crouton and cheese in every bite and they don’t sink. That’s what this soup is all about, after all.

Traditionally Cognac is used, it is French after all, but it can be expensive. A more budget-friendly option is brandy.

Even though there is Cognac and wine, you really don’t taste them at all. They just add a great depth of flavor and richness to the broth.

What can I use instead of Cognac and wine in French Onion Soup?

The simple answer is more broth or stock.

In keeping with the French soup theme. I have a soup recipe that hails from Northern France that uses beer, Soupe à la Bière (Beer Soup). Pic below.

If you’ve made this French Onion Soup with Mini Croutons or any other recipe leave a comment below. I love to hear from my readers!

Taste your stock, if it is salty, you may need to adjust the amount of salt in the dish