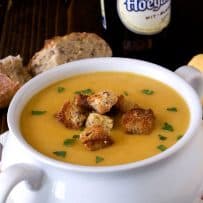 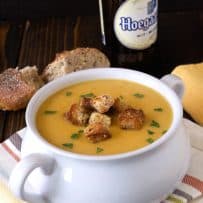 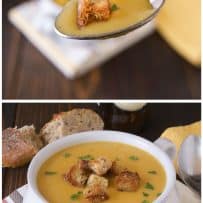 Soupe à la Bière (Beer Soup) or Soupe à la bière du Nord (Northern soup) and even Potage à la bierre, is a delicious potato and leek, vegetarian soup, with the addition of beer from the Alsace region. Rustic and hearty to cosy up with on those chilly evenings.

There are many variations when it comes this soup. Some add cream, cheese or egg yolks, but this recipe is one of my favorites and think you’ll love it too. Doesn’t this look like the perfect bite with a crispy crouton?

Let’s toast to the weekend and stay warm at the same time with this delicious European medieval inspired soup.

Now, in case you’re wondering  how good could soup with beer really taste? It’s pretty darn good. Just like when you add wine to dishes and allow the alcohol to cook out, the same goes here and what you’re left with is a rich velvety, flavorful soup. Throw on some crispy croutons and its heaven in a bowl.

Since we are talking about French soup, I would be remiss to not share with you my ever popular French Onion Soup with Mini Croutons (picture below). A classic that stands the test of time.

If you’ve ever had potato and leek soup, this is similar with beer added for amazing flavor. If the beer is not for you, or you are serving to children, you can omit the beer.

As I mentioned, this soup has no milk or cream. The creaminess comes from the blending of the potato which, in my opinion, gives it a smooth, velvety texture.

If you’ve tried this Soup à la Bière (Beer Soup) or any other recipe on the blog then don’t forget to rate the recipe and let me know how it turned out in the comments below. You can also ask a question too.