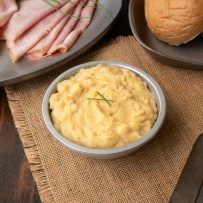 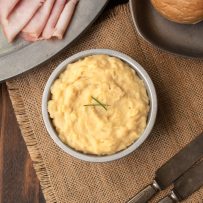 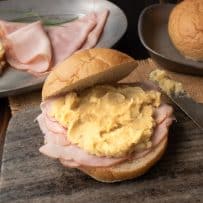 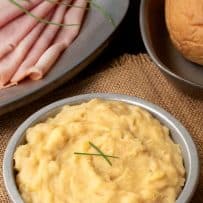 Pease Pudding is an easy, British side dish made with yellow split peas that are cooked with vegetables and smoked ham. Typically served on a ham sandwich, or as a side to a meat dish.

What is Pease Pudding?

Pease Pudding is not even a pudding, it is more of a paste (like hummus). It is made by cooking yellow split peas with a smoked ham hock or shank with vegetables, then blended or mashed.

Not to be confused with mushy peas, this is a native dish to the North East of England from the 14th Century that has its own rhyme. It has been dubbed as ‘Tyneside Pâte’, or Geordie Caviar which.  Also, the name is not a typo, there really is an ‘e’ on the end of peas. Not sure why.

What is the Pease Pudding rhyme?

Some recipes don’t call for the use of ham broth to cook the split peas, including my own mothers. Cooking it this way gives a great depth of flavor and once you try it this way, I think you’ll prefer it too.

Use of the ham shank/ham hock

The ham shank is only used to flavor the broth. Once you have used it, you can save it to use the ham for Ham & Split Pea Soup.

Traditionally, Pease pudding is served in a sandwich roll with ham or as a side dish with sliced ham. It can be served warm or cold. Personally, I like it warm or room temperature because the flavors are better which makes it portable for road trips and picnics.

Another dish served in the North of England is a British pork sausage called a Saveloy, a cooked sausage. It is like the British version of a hot dog that can be served with Pease pudding.

Blend with chicken stock to make a smoky lentil soup.

How long does Pease pudding keep?

In a sealed container, refrigerated up to 1 week. Contrary to the rhyme.