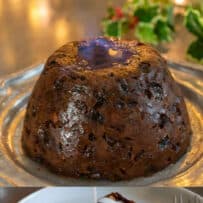 The British Christmas Pudding (or ‘plum’ or ‘figgy’ pudding, as it’s sometimes commonly known) is a dense and delicious dessert made with dried fruit that is soaked in brandy then mixed with seasonal spices and other ingredients, then steamed and served with brandy cream sauce to make for an utterly delectable and truly timeless Christmas dessert.

This traditional British pudding and Sweet Mince Pies and Brandy Snaps were ever present my home during Christmas time and it brings back such fond memories for me growing up during the holiday season. This was how Christmas looked, just like a postcard (picture above). A dense, fruity pudding that was covered with brandy, set alight, smothered with rich brandy sauce and a sprig of holly was the highlight of our Christmas.

A fun thing to do is to pour a little brandy over the pudding and ignite it that results in a beautiful blue flame (picture above). If you do this, make sure nothing around it is flammable, including the serving plate.

Even though this is an alcohol-laden dessert, I grew-up in the days where it was ‘OK’ to have a little sherry at Christmas as a kid, so eating this was definitely no big deal.

The traditional of Christmas pudding

It is believed that it started its life as ‘pottage’, which is a soupy consistency of dried fruits, wine and spices. It is supposed to have 13 ingredients to represent Jesus and his Disciples (I couldn’t stick to this because I did not want to sacrifice flavor and texture).

You’ll notice that I referred to this as plum pudding or figgy pudding. It actually has no plums or figs like there were from its inception in the 14th century and that concoction was light years away from the recipe we know and love today. This could be that it is easier to find the usual currants and raisins versus the former.

Another tradition was to add a sixpence (an old English silver coin worth 6 Pennies) to the mix to bring luck to the person that finds it. As cool as it sounds I will not be continuing this tradition as I don’t really feel like metal seeping into my food.

Today, the pudding is made in the U.K. with suet which is a beef fat. Since suet isn’t sold in the U.S., I substitute butter (you can also use lard, but the butter definitely adds flavor).

Best alcohol to use

Brandy is traditional as is sherry and you can also use Cognac.

How to cook Christmas pudding

It is always steamed using a thick, ceramic bowl called a pudding basin, which gives it its distinctive shape. Once the dough is added to the bowl, it is tightly covered with parchment paper and foil tied with string, then steamed in a large pan for 7 hours. Yep, not a misprint… 7 hours!

The pudding is best when made ahead, way ahead. You can make the mix up to a year ahead as it just gets better with age. I think it tastes just as good if made only days ahead.

I like to make and steam the pudding about a week or so before Christmas Day. When it is cooled, wrap in parchment paper and a layer of foil and refrigerate. The night before you’re serving leave on the counter at room temperature, still wrapped. Warm (while wrapped) in a 300°F/150°C oven for 30-45 minutes.

How to serve British Christmas Pudding

Traditionally, a little brandy is poured over and ignited which results in a beautiful blue and orange glow (see picture). Sliced, served on on a plate with warm brandy cream sauce (or fresh cream). Come to think of it… a mug of Baileys Belgian Hot Chocolate would also complement it nicely!