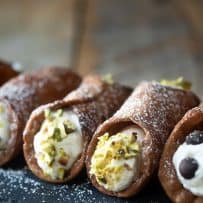 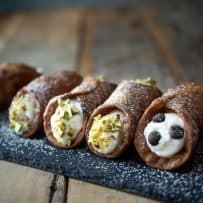 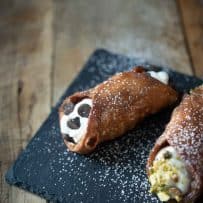 The classic Italian cannoli is one of the most recognizable European pastries in the world. These Traditional Sicilian Cannoli are actually very easy to make and are served adorned with chopped pistachios or candied fruit.

In as much I like to post British recipes from my childhood, I also like to do the same for my husband given his Sicilian heritage. And Sicily (and the city of Palermo, to be exact) is where he and the cannoli originated!

Cannolo (the singular; cannoli is plural) translates to ‘tube’. These little tubes are made from an easy to make dough that is made from flour, cocoa powder, cinnamon, lard and a splash of Italian Marsala wine.

What is the traditional cannoli filling made of?

When it comes to the filling, sweetened ricotta is traditional. However, I have also seen mascarpone cream also used which is not traditional. Garnished with a light dusting of powdered sugar, candied oranges, candied cherries, chopped pistachios and sometimes (and also not traditionally) chocolate chips.

When it comes to making the shells, there really is only one way to form them and that is by using cannoli tube forms that are very inexpensive and easily purchased from Amazon.

This is about as original as a recipe gets for authentic Cannoli Siciliani. While I have not yet been to Sicily, I have eaten many amazing Cannoli on my various travels to Italy over the years.

Cannoli can be made ahead, for sure. However, the moisture in the ricotta can make the shell soggy. What I do is make everything ahead and simply fill them right before you serve them. It is important to have the contrast of the crispy shell give way to the soft and fluffy filling.

Lard is always used for making the cannolo shell. If lard is not your thing, butter can be substituted.