How to Make Chicken Bone Broth 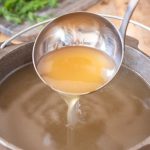 The foundation of all soup, stews and gravy is good broth and stock. If you like to make your own, you need this recipe on How to Make Chicken Bone Broth. There are a lot of good chicken broth/chicken stock out there, but is there anything better than homemade? No, because you can control what goes in there, just real ingredients and it’s less expensive.

Difference between broth and stock

The difference is not a lot and most people just call them broth. Stock is made from simmering the meat and bones for a long time, broth is cooked a shorter time and always has the meat and sometimes the bones. So for this recipe, I called it broth because that’s what people know.

The biggest uses I have for broth is soup, stews and gravy. It is also a comforting hot drink on a cold day and a great way to get extra nutrients into your diet from natural sources. Especially when it’s cold and flu season.

The benefits start right in your stomach by aiding digestion. The protein and collagen are great for strengthening joints and skin. The reason we eat chicken soup when we’re sick? The broth helps strengthen your immune system.

Chicken broth in the slow cooker

Add everything to your slow cooker before you leave for work in the morning, set on low for 8 hours, cover and it’s ready when you get home.

I have sooooo many! From Chicken Soup, Low Carb Cauliflower & Fennel Soup to Risotto, Rice Pilaf, Pulled Pork and Roast Chicken with Gravy.

Parsnips are first and foremost the most important ingredient for me because they add so much flavor with a little sweetness. Fresh dill is also important for adding more depth of flavor as well as bay leaves.

The chicken can be a whole, 7 pound chicken or cut-up pieces. They don’t have to be raw, I always make stock after making a roast chicken  It’s always good to have a combination of light and dark meat because there is a lot of flavor in the dark meat.

One of the most important kitchen items for this broth is my fat separator. It’s a jug that is spouted from the bottom which allows the fat to stay at the top while draining the broth from the bottom. You can also separate the fat by refrigerating the broth and skimming the solidified fat off the top.

2 Comments on “How to Make Chicken Bone Broth”