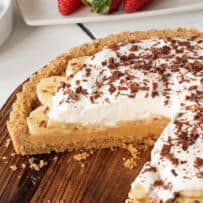 English Banoffee Pie is a simple, no-bake pie consisting of layers starting with a graham cracker (or digestive biscuit) crust, a layer of toffee, sliced bananas then topped with whipped cream and optional shaved chocolate.

Meet one of Englands favorite sweet pies (pronounced ba-noff-ee). This is an easy, classic banoffee that looks worthy of a good bakery dessert.  If you look at the name, it’s essentially a portmanteau (a word blend) of banana and toffee and the name is now in the dictionary.

You will be greeted with ooh’s and ahh’s when serving this dessert and have people asking for a second slice.

All the components of this pie make up the best flavor and the crust is a big part of this.  A thick graham cracker crust that is pressed tightly into the pan  to help keep the crumbling to a minimum. There will be some, it’s unavoidable. The next layer is a nutty toffee layer (more on this below) then a layer of simple sliced bananas and the final layer is whipped cream.

This now beloved pie was invented in the early 1970’s by the owner of the Hungry Monk Restaurant Nigel Mackenzie and his chef Ian Dowding.

I like to use a 9-inch (23 cm) fluted tart pan (because the edges look pretty) with a removable bottom which makes it easier to get the tart out of the pan. A 9-inch (23cm) spring-loaded cake pan or a shallow pie pan is also a good option.

Toffee is like thick, chewy caramel. Butter and sugar are simmered then sweetened condensed milk is added and this is cooked until thickened. When cooled, it sets nicely and is not runny like caramel.