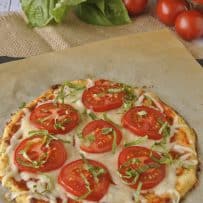 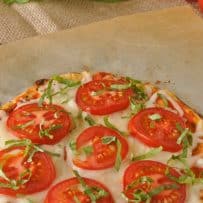 Cauliflower Crust Tomato Basil Pizza.  It looks like pizza, it is just not made with regular pizza dough. Blended cauliflower is substituted for flour and with the addition of basil, Parmesan, mozzarella and goat cheese which is delicious and makes it low carb as well as  keto friendly.

I love a good pizza as much as the next person,  but I don’t always like the heavy feeling that comes along with eating the dough,  you know the feeling.  Don’t get me wrong, I can eat regular pizza just about everyday, but sometimes it’s good to eat a little lighter.

So after doing some research,  it would seem that the cauliflower pizza crust has become popular recently. Since there are so many people going gluten-free,  by choice and  for dietary reasons,  I had to see what all the fuss was about.

How to Make Cauliflower Crust – Step by Step

The crust is started by making ‘cauliflower rice’.  Not as difficult  as it sounds as the food processor does all the work, well most of the work.  Using a medium sized head of cauliflower, pulse the cauliflower florets until they turn into a fine powder.

Next, you have to cook/dry the the cauliflower which is done in the microwave, this also  helps remove some of the moisture. If you don’t have a microwave, spread the cauliflower rice onto a parchment-lined baking sheet and bake at 300°F for 5 minutes.

Once the cauliflower is cooled, it is then wrapped up  in a clean  dish  towel  and  now  it’s  time  to use  your muscles.  You need to  squeeze out as much of the liquid as possible.  If you don’t get  at  least  1/3 cup,  keep wringing,  you know you can do it, it’s worth it and there’s always the calorie burning benefit. The more moisture you can remove, the better the crust will be.

Once you’ve wrung out as much liquid as humanly possible, the cauliflower goes into a mixing bowl, then you add all the flavors and ingredients that help bind the dough. What I really love about this crust is the addition of goat cheese.

I made one with goat cheese and one without and really did prefer the one with. You don’t taste the tang from the cheese, it just gives the crust great texture. Parmesan cheese is also a delicious option. The key to the crust is the egg, just like most recipes, it’s needed to bind the crust and hold it together.

The above images show the crust before it goes into the oven and after it is baked. It looks good enough to eat on its own, doesn’t it?

There’s no rule to the shape that you have to make, it’s a personal choice. But, it is very important to use parchment paper on your baking sheet because it is the only thing, other than a silicone mat that the dough will not stick to.

At this point you’re almost ready for the toppings, but first the crust must baked in the oven so it will be sturdy enough to hold the toppings. For this recipe I chose to make a tomato basil pizza because the vine on tomatoes looked so good in the supermarket.

So there you have it. This Cauliflower Crust Tomato Basil Pizza is a great tasting pizza and you won’t even miss the regular dough.

* If you do not have a microwave, you can spread the powdered cauliflower onto a baking sheet or ovenproof dish, cover with foil and bake at 300 for 5 minutes.