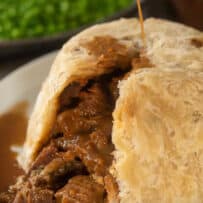 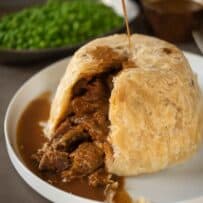 British Steak and Kidney Pudding is a traditional savory British dish that’s both rich and hearty. Tender pieces of beef steak and kidney are cooked in a rich Guinness gravy, steamed (rather than baked) in a flaky suet based (beef fat) pastry.

Just in time for St Patrick’s Day, this classic savory pudding is delicious when served with peas (as mum used to do), but you can serve any vegetables you like.

Steak and kidney is a classic filling not just for this pudding, but is also be used in a classic pie form for a Steak and Kidney pie that is also one of Englands national dishes.

Not to confuse things (I hope), in the U.K., we also refer to pudding as a dessert.

Kidneys are a popular ingredient used in British cooking, but they’re not for everyone as they do have a very rich and intense flavor. If they are not to your liking, then you will love my British Steak and Ale Pie which has a very similar filling, minus the kidney.

In a nutshell, a pudding uses suet pastry and is steamed while a pie uses the same filling with a shortcrust (traditional pie crust) pastry that is baked.

Steak and Kidney pudding is a very old dish born in the 1800’s. It is one of the most popular British comfort foods and “pub grub” that can be purchased in supermarkets in tins (Fray Bentos being the most popular brand). But of course, homemade is always best.

Suet pastry is an old fashioned British pastry that’s perfect for steaming. What exactly suet? It is the beef fat from around the beef kidneys. A good substitute would be either lard, beef tallow (a rendered form of beef fat) or vegetable shortening. Suet is different in texture than lard or shortening, but can be prepared the same way. Details are in the recipe.

A traditional pudding bowl is used for this this recipe. I use a 1.2 liter (2.5 pint)  (6 x 4-inch/15 x 10 cm) ceramic pudding bowl/basin that I purchased on Amazon that is inexpensive.

After lining the bowl with the pastry, then adding the filling, a circle of pastry is put on top then the excess pastry is folded over and a good seal created. See picture above.

The bowl is tightly covered with foil and string is tied around the rim. I like to make a simple handle using string to help lift the bowl in and out of the steaming pan. See picture above.

How do you steam Steak and Kidney Pudding?

Fill a large pan with water, 3/4 of the way up to the top of the bowl. It is best use a ring of foil or upturned bowl to rest the bowl on to keep it raised off the bottom of the pan.

You can also steam steak and kidney pudding in a slow cooker. Your slow cooker must be tall enough to house the bowl and room for the lid. Cook on high for 6-8 hours.

It is best to keep the bowl off the bottom of the pan while steaming and this can be done with a small ceramic ramekin, or a piece of foil made into a ring (see picture above). All these details can be seen in the attached step-by-step video.

Suet is dried beef fat. Beef tallow or lard is a more readily available substitute in the U.S.