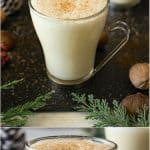 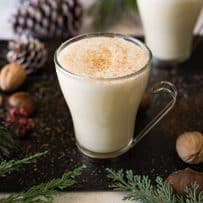 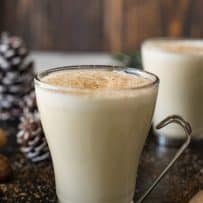 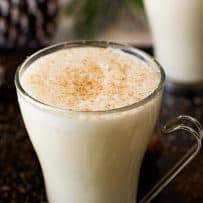 This Traditional Homemade Eggnog is made just how you want it, creamy and rich with all the holiday flavors of vanilla, nutmeg and cinnamon.

A cozy  mug of comfort for the whole family.

Eggnog is one of the best and things about the Christmas season. It doesn’t always have to be spiked (although I do enjoy it that way too), it is more than enjoyable the way it comes because it just tastes like Christmas.

This recipe is non-alcoholic so you can make a big batch for the whole family. This recipes yields enough for 4 people at 8 ounces each.

This Traditional Homemade Eggnog does not come really thick (it’s like hot chocolate) like some you buy in the stores, which I think are sometimes to thick.   That’s because they contain cornstarch and guar gum. Does anyone even know what guar gum is? Apparently it’s a thickener that doesn’t sound very good for you.

What I love is that this eggnog recipe is all natural and you will know every ingredient. It is also thick enough to still make it creamy and luscious and linger on your tongue. What I also love is the addition of whipped egg whites.

The whites get folded in at the end and they thicken the eggnog so when you serve it, the egg whites float to the top and you have what looks like a foamy topping, like a latte.

We all love Traditional Homemade Eggnog as a festive drink, but turned it into a classic dessert. Check out this eggnog crème brûlée recipe. It’s really easy and has only 3 ingredients.

Because this is a traditional recipe, it is made with eggs. The egg yolks are cooked to the FDA recommended temperature of 145°F/63°C. The whites are not cooked and if you don’t feel comfortable adding them to eggnog, you can leave them out. The only difference is the texture will be different, it will be thinner and you wont get the foamy head on top.

What is the traditional alcohol in eggnog?

As I mentioned, this eggnog is not spiked. I don’t like to add any alcohol to a whole batch because not everyone likes that way and  you can’t feed it to the kids. I like to leave that up to whoever is drinking it. Spike this eggnog however you like, with rum or bourbon. I’m a bourbon spiker.

If you’ve tried this Traditional Eggnog Recipe or any other recipe on the blog then don’t forget to rate the recipe and let me know how you got on in the comments below. I love to hear from my readers!