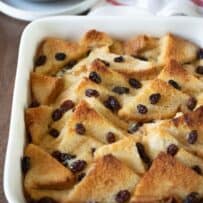 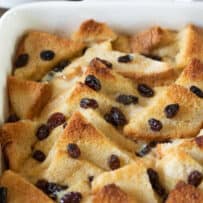 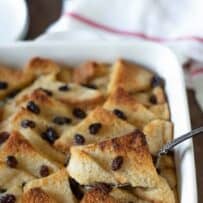 This simple, Classic British Bread and Butter Pudding bread and butter pudding is so similar to the ever popular Bread Pudding, except the bread is buttered. Plus, it could not be easier to make. You’ll get the perfect taste sensation as it gets brown and crispy on top and light and custardy underneath.

This dish is best made with day old bread that has dried out. This is because fresh bread is very moist and will not absorb the custard as well. Once the bread has dried out, it will be more  sponge-like so it can soak up all the flavors.

How do you get day old bread?

You can leave it out in the open air for a day to dry out, or, you can lightly toast it and allow the bread to cool. Just don’t brown the bread because it will burn in the oven.

In typical fashion of old English recipes, this dessert was a way for the poor to use up extra egg, milk and bread as well as being an inexpensive dish to make.

Since bread was an inexpensive grocery item, bread was used a lot for both savory and sweet dishes, just like Berry Summer Pudding.

Why is it called pudding?

In England, we refer to dessert as ‘pudding’. Historically, dessert was used more by the upper classes for their ‘posh’ sweets and the name pudding was used by the lower classes for more rustic, modest desserts.

Do you serve bread butter pudding warm or cold?

It is best served right after baking. The tops of the bread slices are still warm and crispy and the custard is creamy. There’s your taste sensation right there!

This recipe serves 4 people but you can double the recipe if you need to serve more people  (you’ll need a larger dish or make 2 of the same recipe). To store leftover bread and butter pudding, cover tightly and store refrigerated for 3 days.

To reheat bread pudding, put in an ovenproof dish, cover with foil and reheat at 350°F/180°C. Remove the foil at the end to re-crisp the bread (it’s all about that crispy top, remember?). I like to serve with whipped cream and berries.