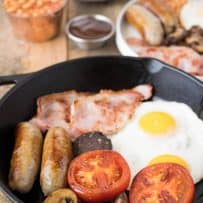 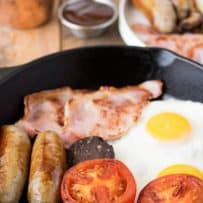 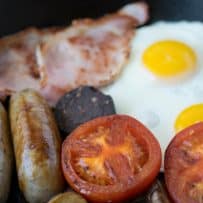 The Full English Breakfast is England’s favorite way to start the day. With all your favorite breakfast items and a few you may not be familiar with. This is how you do breakfast, British-style. So bring your appetite as this is a big breakfast and not for the faint of heart. I’m going to take through all the components of a traditional full English (as we call it).

It doesn’t get anymore British than this, because England actually has a National breakfast. There are usually 5-7 items that make up a full English breakfast depending on which items are included. If I’m going for it, I’m going for all 7. Here’s how this massive breakfast shapes up.

Good English pork sausage. It’s hard to find a bad sausage in England because they are made really well. Recently I’m seeing a lot more supermarkets carry British-style bangers and they are a good substitute. If all else fails, any of your favorite sausage would work.

American bacon is not allowed here. I love American bacon, it’s just not the right kind for this Full English Breakfast.

What is American bacon? Isn’t it just, bacon? Yes, but in England we eat back bacon (cut from the back). It’s very much like Canadian bacon, as it does not crisp up like American bacon that is streaked with fat and cut from the belly. Back bacon is very ham-like with the fat around the edge and unsmoked.

Fried and sunny-side up. Scrambled does not belong here because you have to have the runny yolk. I like to think of it as breakfast gravy.

Beans for breakfast? Sure, start the day with fiber. Baked beans, just like American barbecue beans without the barbecue flavor, they are just in a plain tomato sauce. Canned is allowed, or you could make your own. Here’s my recipe > British Baked Beans.

Fresh only, no canned. Simply cut in half and sautéed flesh side down to soften and brown slightly. It’s nice to have something fresh in the meal.

Fresh, brown or white mushrooms, nothing fancy, whatever you find in your grocery store. Sliced and simply sautéed.

Buttered toast is acceptable, but if you’re going all out you really need fried bread. What is fried bread? It’s white bread fried in vegetable oil until golden brown. That’s about as simple as it gets. No one said this was a healthy breakfast.

I know what you may have heard, but it has flavors and spices that make it taste really good. It’s a sausage not a pudding and not always served with the breakfast both in England and Scotland.

It is a personal preference but again, if I’m going for it, I’m going for all of it. It’s a very flavorful, all natural pork sausage (but it does contain something to make it black). I’ll let you Google that…

Brown sauce is a must (it is just like a steak sauce) and ketchup is allowed.

So that’s the breakdown and lowdown on Full English. I don’t recommend eating it everyday. I like to enjoy it once in a while on Sunday morning. Because the breakfast is so big, you can imagine, I don’t eat much the rest of the day.

If you’ve tried this Full English Breakfast  or any other recipe on the blog then don’t forget to rate the recipe and let me know how it turned out in the comments below. I love to hear from my readers!

This full English breakfast recipe was first featured on Food Fanatic, where I am a contributor.