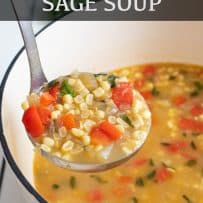 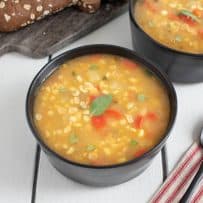 Sweet Corn Sage Soup a is broth-based soup that comes with lots of flavor from delicious corn, garlic, bell pepper and fresh sage. This is a dairy-free soup, which makes it lighter, but comes with a little something to help it thicken.

As I mentioned, because this has no dairy, this is not a corn chowder. This makes it perfect for vegetarian, vegan/plant-based, low carb, gluten-free and low calorie eating plans.

It is always better to use fresh corn off the cob, when available. There are a few methods of cutting corn off the cob and my method is simple. Hold the corn with its flat end on the cutting board, start in the middle of the cob and cut down. Work your way around the cob then flip it over and do the same. By starting in the middle versus at the top, the kernels won’t go flying all over.

If you can’t find fresh corn, you can still make this soup using frozen corn (you don’t have to defrost it).

The secret for extra corn flavor

The soup is started by making corn broth. It’s very easy and adds a lot of corn flavor and there’s a lot of flavor in those cobs that you don’t want to leave behind.  Once the corn has been cut off the cobs, add them to a large saucepan with the vegetable stock or broth and bring to a simmer for 20 minutes covered.

The liquid is strained and set aside.

Onions, potatoes, bell pepper, corn, salt and pepper, chopped sage and garlic are cooked in butter and oil for a few minutes. The vegetable stock is added and the soup is simmered for about 30 minutes until the corn is tender and the potatoes are softened.

I tried a little method today to thicken the soup and it worked. Using an immersion blender, I whizzed it around in the soup, just for a minute and it really thickened the soup nicely. Being careful to keep a lot of the corn, potato and red pepper intact, you don’t want it all puréed. If you don’t have an immersion blender, you can ladle about a cup into the blender, then return it to the soup.

Another one of my favorite soup recipes for this time of year is my zucchini and sweet potato soup. It’s a thick and creamy soup, but without any cream which is actually thickened with sweet potato.  It was this thickening concept that inspired me to add potato as a thickener to this sweet corn sage soup.

* My easy method is to hold the cob upright with it's flat end on the board. Cut off the kernels starting in the middle and work down and around the cob. Then flip the cob and do the same thing. This way, the kernels wont go flying all over when you try and cut from the top of the cob.