Strawberries and Cream for Wimbledon 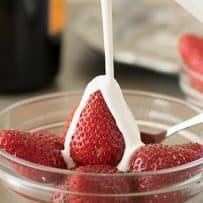 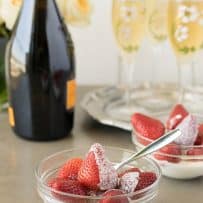 Eating Strawberries and Cream for Wimbledon is the traditional way to enjoy the biggest tennis event of the year. Fresh strawberries are simply bathed in fresh whipping cream which is defines that the British summer and Wimbledon has arrived.

An easy, no-cook, yet delicious treat that comes with history and tradition. Strawberries and cream have long been served at Wimbledon since the first tournament in 1877 and since Monday is the start of this 2 week tennis event, I’m bringing you the recipe and the history.

Who invented strawberries and cream?

It is believed that it was King George V who first brought strawberries and cream to Wimbledon in the early 1900’s.  The reason? Strawberries were the only fruit available at the time and apparently strawberries were very fashionable to eat at that time.

Nothing says summer has arrived in England more than the Wimbledon tennis championship. It is the highlight of the British summer social calendar and anyone who’s anyone will be attending.

Strawberries are at their peak right now, so it’s perfect timing because more than 61,000 pounds of strawberries, more than 1,800 gallons of cream and more than 26,000 bottles of Champagne will be served. Wow, that’s a lot of hungry (and thirsty) people attending.

How to hull strawberries

It may seem like a silly thing, isn’t it a matter of just cutting off the green top? Yes, but you also want to keep the strawberries shape for a nice presentation.

After removing the leaves, I take a small paring knife and cut around the white part so that a ‘cone’ shape of the core is removed and from the side, the strawberries still look perfectly intact.

The cream is not whipped or sweetened. The thick, cold cream  is simply drizzled over the sweet strawberries and eaten that way. It’s the best and only way to enjoy them, so why mess with tradition?

So if you’re a tennis fan (or even if you’re not), strawberries and cream are the perfect summer treat.

Another tradition since 1971 at Wimbledon is the Pimm’s No. 1 Cup Cocktail. Which is also a traditional British summer drink (see pic below).

I have a delicious twist on the classic Pimm’s,  Pimm’s strawberry mint cocktail (below) that would also pair perfectly with strawberries and cream.

If you’ve tried these Strawberries and Cream for Wimbledon or any other recipe on the blog then don’t forget to rate the recipe and let me know how it turned out on in the comments below. I love to hear from my readers!

33 Comments on “Strawberries and Cream for Wimbledon”