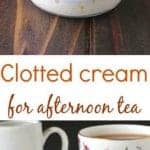 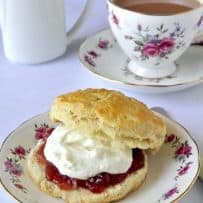 Clotted Cream, customary for afternoon tea (or cream tea) is a thick, unsweetened cream that comes from the best Devon cows served on English scones. Read on to find out about the making of the cream and the history behind this quintessential British pastime.

The History and Tradition of Afternoon Tea: The tradition of afternoon tea started in the early 19th Century when the wealthy set felt they needed a ‘pick-me-up’ in the afternoon. This is not surprising because they typically ate just 2 meals a day; breakfast and dinner, so the skipping of that 3rd meal led to a mid afternoon slump hence the creation of afternoon tea.

Traditionally, the upper classes would serve a ‘low’ or ‘afternoon’ tea around four o’clock. The middle and lower classes would have a more substantial ‘high’ tea , served later in the day at five or six o’clock, in place of a late dinner. The ‘high’ and ‘low’ names were given for the height of the tables used each time.

Weather permitting tea would be served in the garden. If typical grey skies loomed and impending rain was upon them (typical British weather) the tea service would then be served indoors in the Drawing Room. The drawing room a room in the house where one could ‘withdraw’ to for privacy with their guests.

What is cream tea?

Cream tea is afternoon tea with finger sandwiches, pastries and scones with clotted cream and jam. If you’re not serving scones and cream, it’s not cream tea.

What do they serve at a traditional afternoon tea? The selection of food ranged from savory to sweet. Starting, of course, with a pot of tea. Traditional Black English tea, Darjeeling (an aromatic floral tea from India) or Earl Grey (a blend of black teas scented with oil of bergamot) were typically served.

Sandwiches were usually cucumber with cream cheese, radish and butter or smoked salmon and always with the crust removed, sometimes open-faced. They were known as finger sandwiches.

Is clotted cream good for you? I would say, yes and no. Yes, in that you are consuming calcium, but no as I wouldn’t recommend eating it every day because of the fat content.

If you’ve tried this Clotted Crea recipe or any other recipe on the blog then don’t forget to rate the recipe and let me know how it turned out in the comments below. I love to hear from my readers!