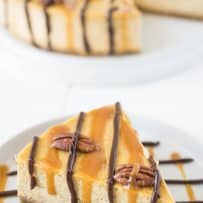 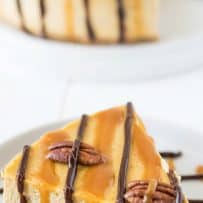 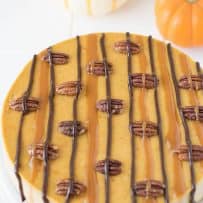 Pumpkin Turtle Cheesecake is an extra creamy cheesecake with a graham cracker crust made New York style. Topped with caramel, chocolate sauce and toasted pecans, this is cheesecake taken to the next level.

It’s pumpkin season and cheesecake is my husbands favorite, in particular New York cheesecake. I’ve been promising him a cheesecake for some time, so I combined both of his favorites all into one amazing dessert by making it turtle.

Why is it called turtle pumpkin cheesecake?

Original turtle candies are pecans and caramel dipped in chocolate and their shape looks like a turtle from the early 1900’s. So apparently it seems that any dessert that features pecans, caramel and chocolates are popularly labeled as ‘turtle’.

What is the difference between a New York cheesecake and  regular cheesecake?

New York cheesecake cannot be beat and my husband he said this is the best New York cheesecake he’s had (awww).  I think the secret is the addition of heavy whipping cream which makes it extra creamy. There is one rule about a New York cheesecake that my NY born husband told me, the crust does not go up the sides. I don’t know why, that’s just how they do it. Good to know.

Some pumpkin cheesecakes get overpowered with the spices used, but I am very pleased with the balance which allows the flavor of the pumpkin to shine through. While this pumpkin turtle cheesecake is perfectly delicious in its birthday suit (below), it is even better adorned with all of the toppings.

Cheesecake baking tips to prevent cracking: If you do want to serve the cheesecake naked and looking pretty, the biggest thing is avoiding the cheesecake cracking (look up ^ mom, no cracks). Sometimes it can’t be avoided, but there are steps you can take that can really help:

These are my tips that helped achieve this perfect cheesecake and I hope they work for you.

If you’ve tried this Pumpkin Turtle Cheesecake or any other recipe on the blog then don’t forget to rate the recipe and let me know how it turned out in the comments below. I love to hear from my readers!